How often do you have mee goreng (fried noodles) at mamak stalls? I do not frequent mamak stalls very often, but the last time I was there was about two months ago, right after a day of shopping with the family, and everyone was hungry, since we had our dinner really early that day, so by 10.30pm, our tummies are rumbling, and we stopped by the mamak stall near my house. I ordered a plate of Mamak Mee Goreng (it was ages since I last had any!), of course, specifically requested that my plate of mee goreng, "mesti tambah pedas", which meant, "extra spicy"!!  And boy, was it spicy, the noodles was a little too moist, but it tasted good and I was hungry. I finished everything on the plate!


For my friends outside of Malaysia, you must be wondering about this "mamak stall". The term "Mamak" refers to the Muslim Indian immigrants from South India, whose forefathers have settled in Malaysia and other parts of Southeast Asia, centuries ago. Mamak stalls are run by them, and these stalls are a part of the daily hangout spots for the young and old, especially popular for young adults and teenagers. These stalls are opened until the wee hours of the morning, while some operate 24 hours daily. A good mamak stall can attract hundreds of customers daily and these spots are especially crowded during the world cup season, as most of these stalls would have set up a huge projector-TV for the customers to watch the football matches while enjoying their meal. A season of booming business for them!

Mamak stalls can be found almost everywhere in Malaysia, but are extremely popular in Selangor and Kuala Lumpur. The most popular food served at any Mamak stalls are ; mee goreng (fried noodles), roti canai (paratha), instant noodles, teh tarik/teh halia (milk tea/milk tea with ginger). Of course, they have lots of other food and beverages on their menu. 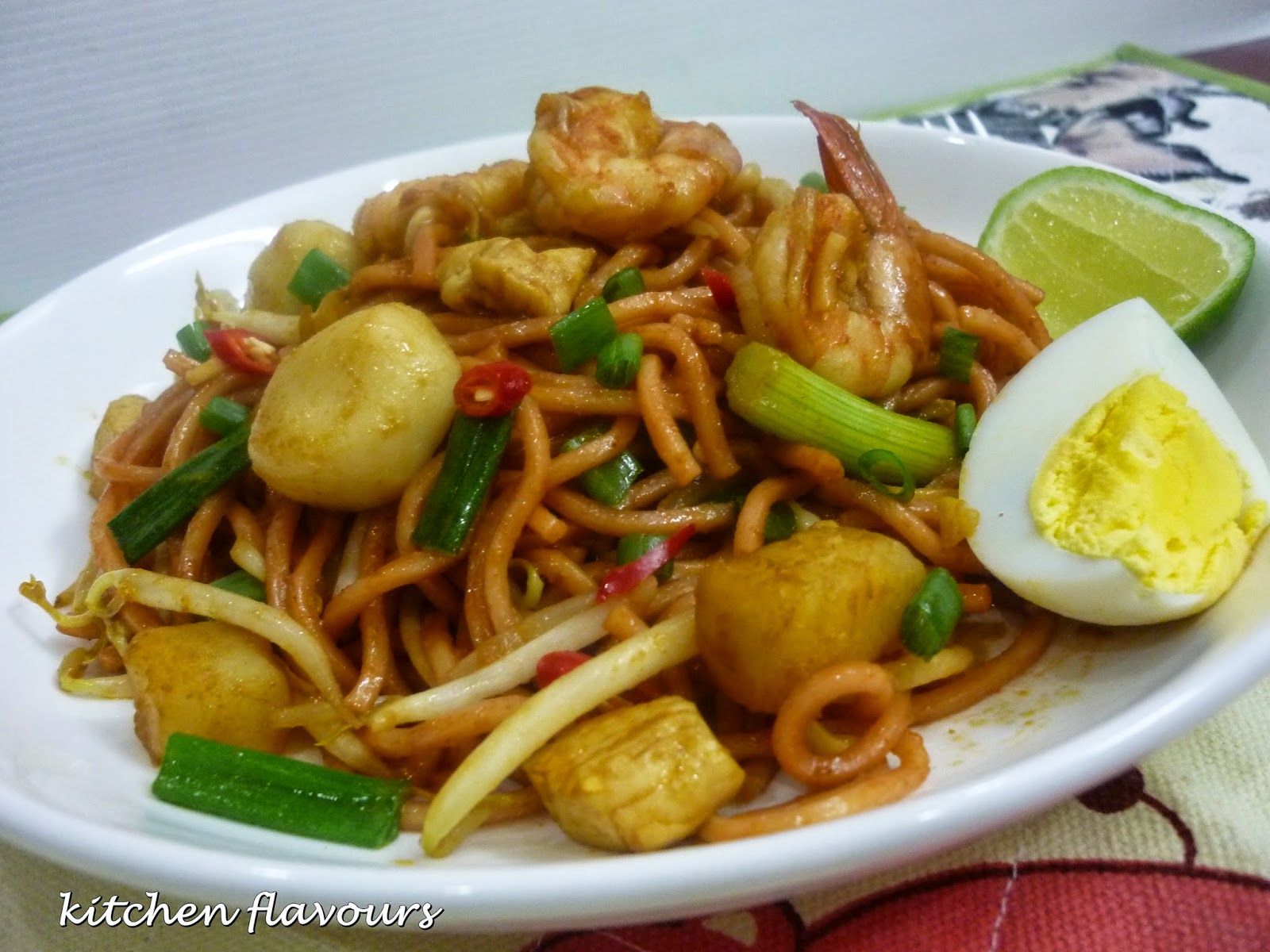 There are many variations of Mamak Mee Goreng. Vegetables like cabbages or mustard greens, firm tofu, fresh tomatoes wedges can be added. Some are fried with eggs mixed in, which makes the noodles a little too moist and sometimes soggy, which puts me off. I prefer the drier ones, without any eggs thrown in with the noodles, preferring the eggs served separately, either fried or hard-boiled. Just like this plate of Mee Goreng, from Gordon Ramsay's cookbook, Gordon's Great Escape Southeast Asia.

I have replaced the squid with fish balls as I went to the market a little later than usual that morning (woke up late!), and the squids are all sold out! I like it that this recipe has potatoes. Most of the mamak stalls nowadays have omitted potatoes and used firm tofu instead, which is delicious too, but you should try it with potatoes if you have not tried it before. And I have added in lots of beansprouts as I love lots of beansprouts in fried noodles. I have used Lingam's chilli sauce (that was what I had), and since it is already sweetened, I have used regular dark soy sauce to replace the sweet dark soy sauce. I would cook this again, though the next time, I'll use chilli paste instead of chilli sauce and would not use the sweet dark soy sauce. And the lime is a must, Mamak Mee Goreng always tastes better with a squeeze of lime over! 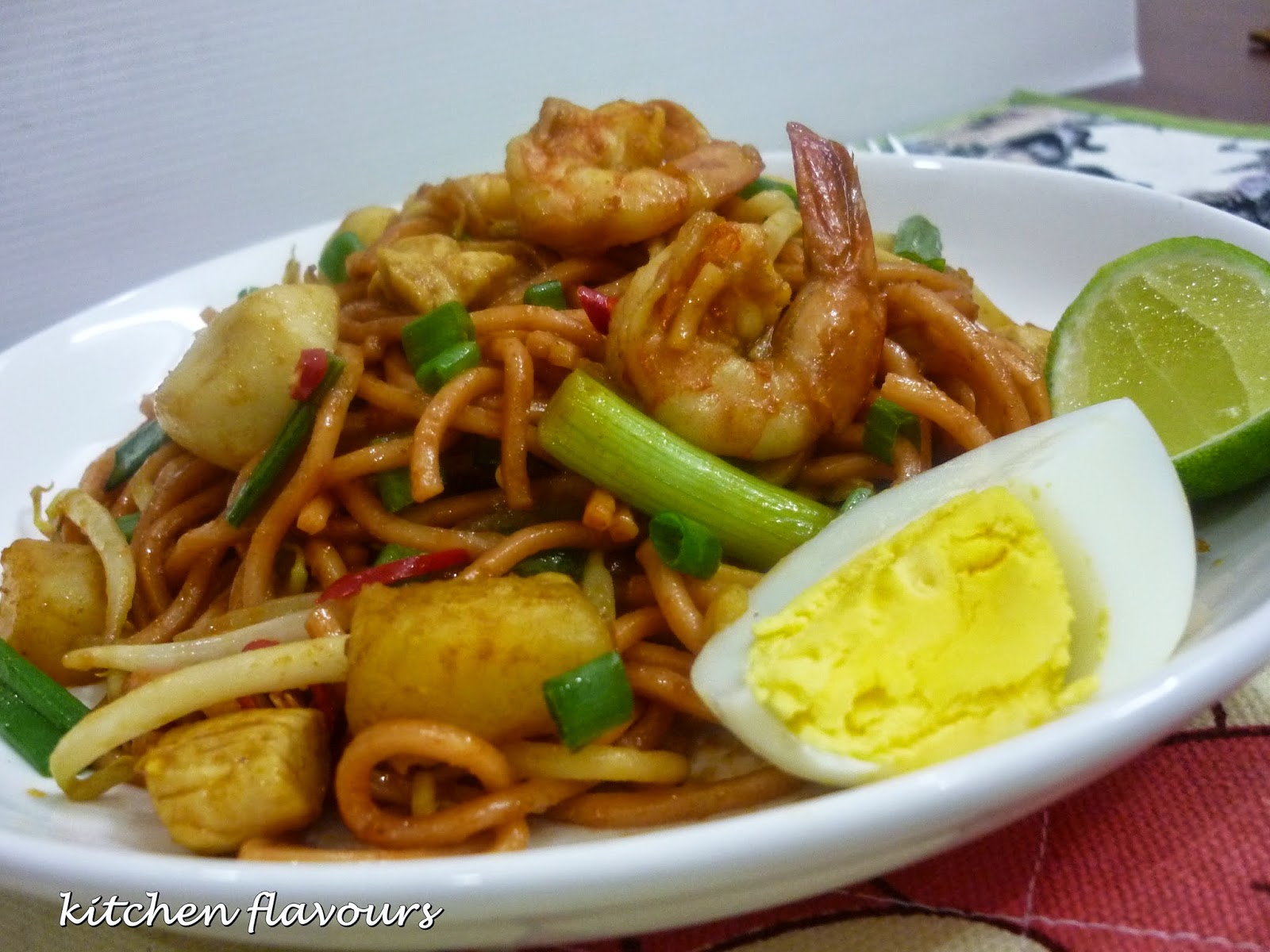 Does this come close to the ones from the Mamak stall? Well, it is better than most of the ones I've eaten, but then, each mamak stall has their own way of cooking with different ingredients, so it really, much depends on your own taste bud.

My fondest memories of Mamak Stalls, was, when I was in my early 20's. A group of us would always head on to these stalls right after our weekly session of badminton and sometimes after squash during the weekend. A nice place to hangout, have a cup of teh tarik, maybe a plate of mee goreng or roti paratha, just relax and chit-chat with friends. And we could sit for hours, the stall operators would not chase us away!


To prepare the sauce, combine all the ingredients in a bowl, mix well and set aside.
Heat the peanut oil in a wok and cook the garlic and shallots for 1 minute. Toss in the chicken, potato and curry powder and stir-fry for 3-4 minutes until the chicken and potato have coloured, and the potato is crispy.
Add the sauce to the pan and mix well, ensuring that all the ingredients are evenly coated. Allow the sauce to boil and reduce slightly. Add the beansprouts and noodles and stir-fry for a further 3-4 minutes, until the noodles start to crisp up in some places, then remove. The wok should now be quite dry. When the noodles are ready, toss in the squid and continue to cook for a further 1-2 minutes until it is ready.
Divide between four plates and garnish each with the spring onions, poached prawns, red chillies, lime wedges and egg quarters.

I'm linking this post to Cook Like A Star (Gordon Ramsay) hosted by Zoe of Bake For Happy Kids, Yen of Eat Your Heart Out and Mich of Piece of Cake. 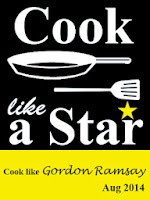 Posted by kitchen flavours at 11:36 PM