"L'Oeuf Incroyable" (The Incredible Egg), the theme for this week at I Heart Cooking Clubs (IHCC). Oh yes, eggs are pretty incredible, nobody could argue with that!  I've chosen to make this pretty incredible eggs with soldiers, well, Jacques Pepin style, with hidden yumminess under the eggs. He calls this Cocotte Eggs with Creamed Mushrooms.

I have made eggs with soldiers many times, but have always bake the eggs in the oven until it is just set. Jacques Pepin's method is however, cooked the eggs in ramekins placed in a saucepan which is filled with water and placed over a low heat, keep at a simmer for about 5 minutes or so until the eggs are done to your liking. I like his method better! 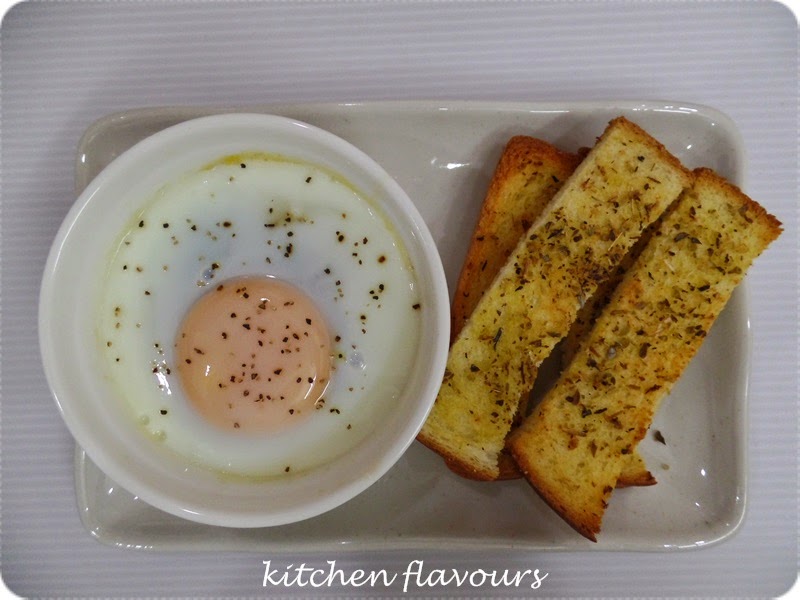 His recipe uses white mushrooms but I've used fresh shiitake and also, I've added three medium leeks. Saute some chopped shallots, then the leeks which I've cooked for about 3 minutes before adding in the fresh sliced mushrooms. Cook for a few minutes, add salt and pepper to taste, add some cognac and heavy cream. Recipe uses cognac but I have an open bottle of white wine, so I used that instead. Continue to cook till the sauce has reduced, but still creamy. Divide evenly between ramekins. Scatter some cheese over, break an egg over the top, place in a saucepan that has a lid, and some hot water that comes right about halfway up the sides of the ramekin. (Have the saucepan ready with hot water in a low simmer while you are preparing the eggs).  Cover the pan and let simmer, making sure it is a low simmer, for a few minutes until the egg is set to your liking, check it often has eggs tend to cook really fast when you are not watching! 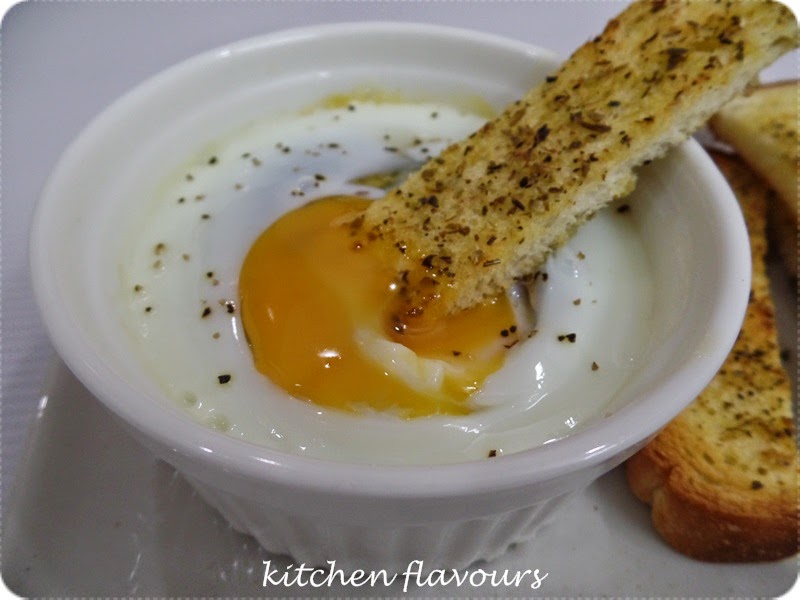 To make the toasted soldiers, I buttered some slices of white bread on both sides, sprinkle with some garlic powder and dried oregano on both sides, then using a serrated knife, cut the bread into long sticks and toast in the oven at 180C until golden and crispy, about 10 minutes. Serve the Cocotte Eggs immediately with the toasted sticks. 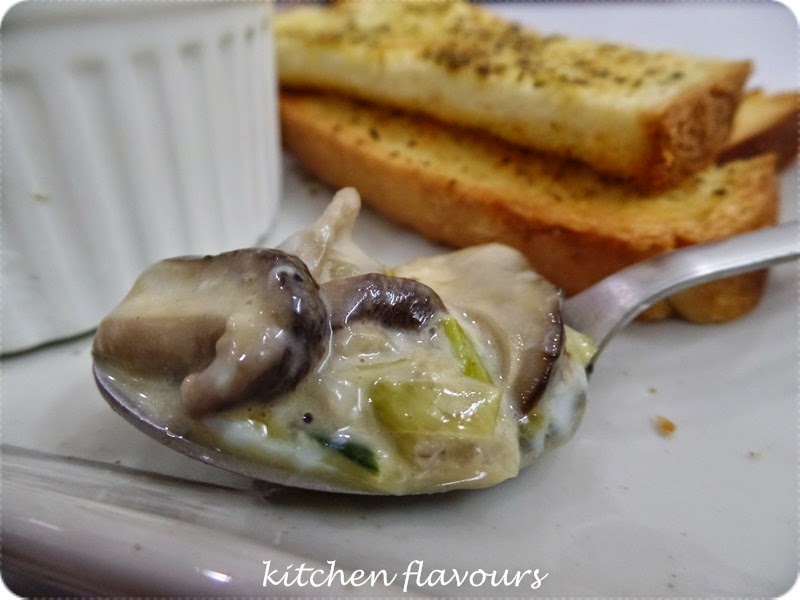 The creamed mushrooms and leek underneath the eggs and the cheese. Yummy!

Heat the shallot and olive oil in a small saucepan over high heat. When the mixture begins to sizzle, cook for about 30 seconds. (Add the leeks, stir-fry for a few minutes). Add the mushrooms, salt, and 1/4 teaspoon pepper and cook, stirring occasionally, for about 2 minutes. Add the cognac, mix well, then add the cream and bring to a boil. Boil over high heat for 1-1/2 to 2 minutes to reduce.

Divide the mixture in the saucepan among four small (1/2-cup) pots de creme ramekins or other small moulds and sprinkle the cheese on top. (The recipe can be prepared ahead to this point).

Just before serving time, break an egg into each ramekin and arrange the ramekins (without their lids) in a saucepan that is deep enough so the pan lid fits on top to cover the ramekins while they are cooking. Pour enough water around the ramekins in the pan to extend about 1/2 inch up the sides. Bring to a boil, cover the pan (not the individual ramekins), and cook for 5 to 7 minutes, or until the eggs are set but still a little runny.

To serve, place a ramekin on each of four plates and sprinkle a little freshly ground black pepper on top of the eggs, if you like. Arrange some sticks of bread around the ramekins and cover the moulds with their lids if they have them, so diners have the pleasure of lifting the tops. Serve with a small espresso spoon on each plate.

I'm linking this post with I Heart Cooking Clubs (IHCC), theme for this week
"L'Oeuf Incroyable" (The Incredible Egg) 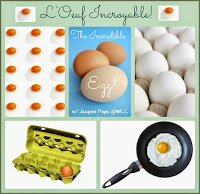 Posted by kitchen flavours at 3:45 PM