"May 2015 : Mystery Box Madness Challenge", the theme for this week at I Heart Cooking Clubs (IHCC). We are "given" a box with ten ingredients and we are to select at least three out of the ten to use in a recipe from any of IHCC's past and present featured chef. This month's mystery box ingredients are Brie, Crab, Chives, Strawberries, Vanilla, Breadcrumbs, Pecans, Green Beans, Vinegar, Puff Pastries. 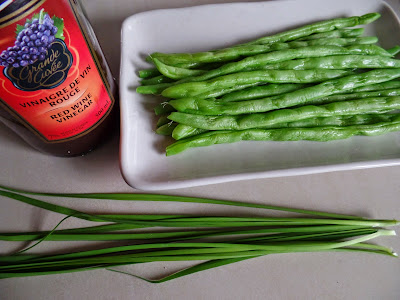 Red wine vinegar, Green beans and some Chives from my potted garden, goes into this dish ... 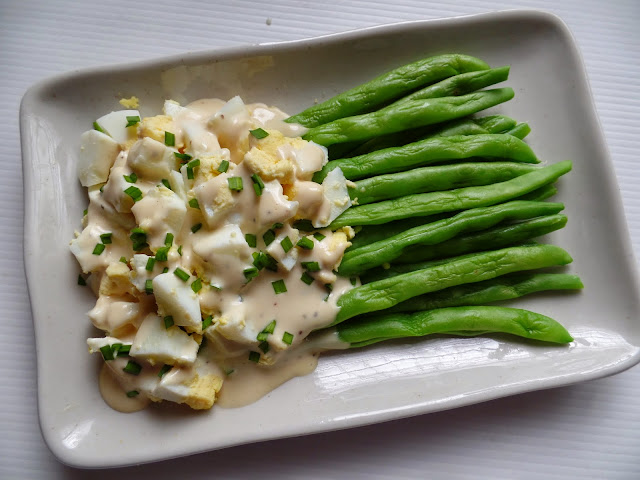 Originally this dish is called Asparagus Fans with Mustard Sauce, but I have replaced the asparagus with green beans. Instead of boiling the green beans, I have cooked them in the microwave for two minutes. They look rather crinkly after that! Despite their crinkly appearance, these green beans are still crunchy and sweet.

Very easy and quick to put together. Get ready some hard-boiled eggs, either sliced them to strips using an egg slicer, or just chopped them up roughly with a knife like I did. The sauce is made by mixing the red wine vinegar, mayonnaise, Dijon mustard, water and some black pepper. I've added a pinch of salt. 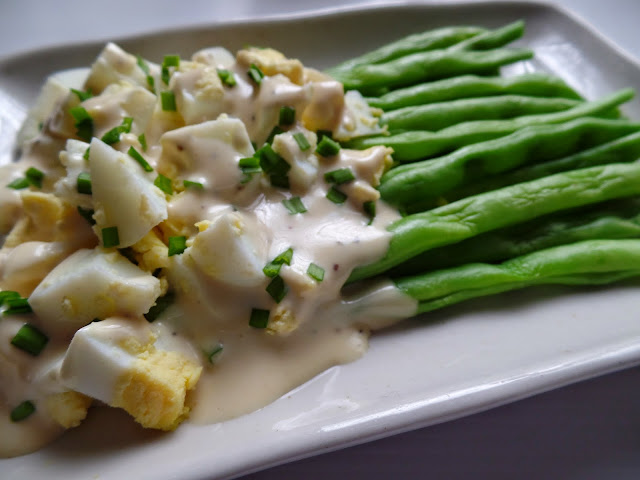 To serve, place the green beans on a plate, arranging them with one end close together and the other end spread out like a fan. Drizzle some sauce over the lower third of the green beans, scatter the eggs over, drizzle with a little more of the sauce, and sprinkle the chopped chives over.

I made this for my afternoon lunch. It makes such a simple, easy meal for one. The green beans are crunchy and sweet. I really like the eggs with the sauce, and was thinking that it would make a delicious sandwich filling, over a bed of lettuce, between two slices of white sandwich bread!

Lower the eggs into enough boiling water to cover them and cook at a very gentle boil for 10 minutes. Drain off the water and shake the pan to crack the eggshells. Add ice to the pan and set aside for at least 15 minutes to cool completely. Shell the eggs and place them, one at a time, in an egg slicer, cut through them, then roate them 45 degrees in the slicer and cut through them again to create strips. Alternatively, chop the eggs with a sharp knife. Set aside.

Peel the lower third of the asparagus spears with a vegetable peeler. Bring 3 cups salted water to a boil in a large skillet. Add the asparagus, cover partially, and bring back to a boil over high heat. Boil over high heat for 5 minutes, until the spears are tender but still firm. Using a slotted spatula, remove the asparagus from the water and put it on a platter. (I microwave the green beans on high for 2 minutes).

For the sauce : Mix all the ingredients together in a small bowl.

At serving time, arrange the asparagus spears (green beans) on a platter, positioning them so the stem ends are close together and the tips are fanned out. Coat the lower third of the asparagus spears with the sauce and sprinkle the eggs and chives over and around them. Serve.

I'm linking this post with I Heart Cooking Clubs (IHCC), theme for this week
"May 2015 : Mystery Box Madness Challenge". 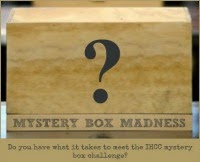 Posted by kitchen flavours at 2:51 PM