Tuesdays With Dorie (TWD) is currently baking from "Baking Chez Moi", by Dorie Greenspan., and the selected recipe for this week is Chocolate-Cherry Brownies.

This recipe uses dried cherries which is boiled in a mixture of a couple tablespoons of red wine and water until the cherries has soaked up most of the liquid, then left to cool before using. I do not have any opened bottle of red wine, so I have used kirsch instead. 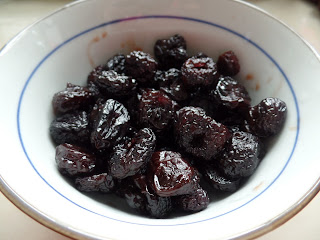 Moist, plump dried cherries after it has soaked up all the kirsch and water, smells really nice.

Just like most brownies, they are really easy to make, without the need of a stand mixer. Everything is mixed in a bowl. I used dark chocolate, most of it is melted together with the butter, and the balance is chopped to fine pieces to be mixed into the batter later. One interesting ingredient is the usage of ground black pepper. Though I can't taste it in the baked brownie, it is an interesting ingredient to be added to a brownie! I've reduced the sugar slightly, used  only 120 gm and have added a teaspoon of vanilla extract even though it is not stated in the recipe. 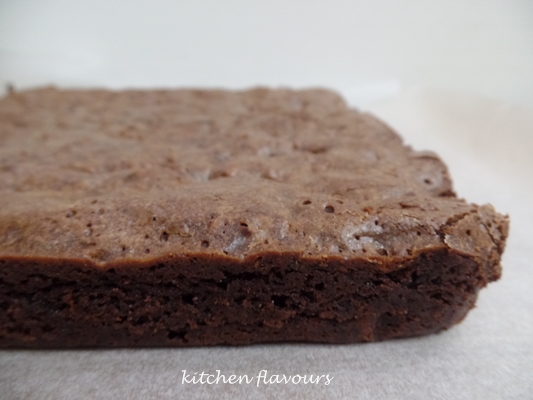 According to the recipe, the brownie is baked for 27-29 minutes until the top is uniformly dull. Mine took a little longer, as the centre is still shiny, soft and not cooked. It was done at 35 minutes, when a thin knife inserted in the centre come out almost clean, and the top of the brownie is dull and crisp. 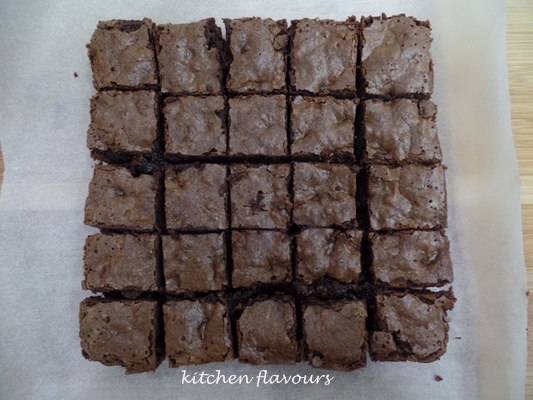 I made these brownies in the evening and left it to cool in the pan overnight. They were sliced on the next day. They were easy to slice, though the next time I would cut the cherries in half, as they were quite big and plump! 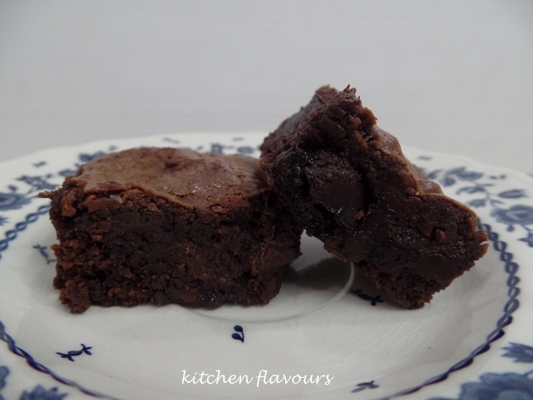 These brownies are so yummy! With a layer of crisp top, the insides are moist, fudgy and so chocolaty delicious, with the melted bits of chocolates in it! I love to bite into the moist, plump cherries, which I could detect a faint fragrance of the kirsch. Chocolate and cherries, they are a perfect combination!

Posted by kitchen flavours at 9:00 AM