Another pepper post! Well a couple of days ago, I bought some bell peppers in traffic light colours, red, yellow and green. I used a red one for some Chile Jam which I made in my previous post, used some for my veggie stir-fries and have a few more whole peppers in my fridge. I'll be going for a short holiday with my family, there will be no cooking for a few days and thought of using up all the peppers in a recipe which I found in Rachel Allen's Favourite Food At Home. 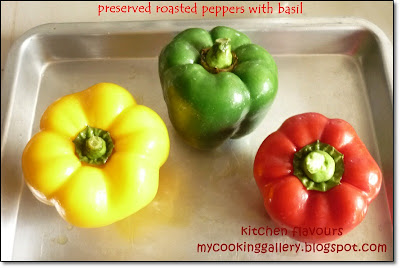 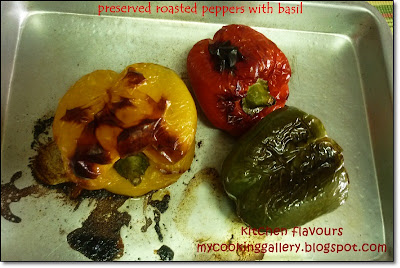 The peppers are first roasted in the oven for about 40 minutes, they will be soft and slightly blackened, and smells wonderful, the smell of roasted peppers. 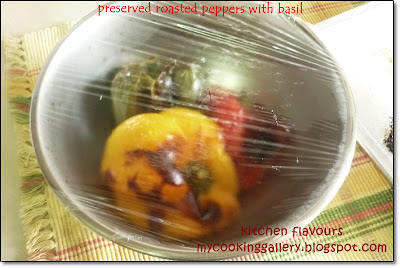 Transfer to a bowl while still hot, keep covered, leave them until cool enough to handle, or until it comes to room temperature. The hot peppers will sweat (water) and its' own steam will make the peeling of the skin easier to handle. 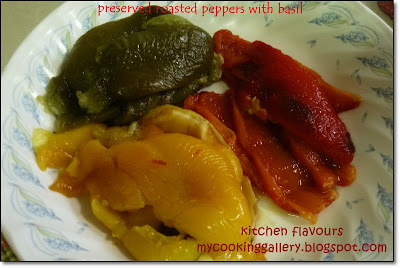 After the skin are peeled, break the peppers into quarters. 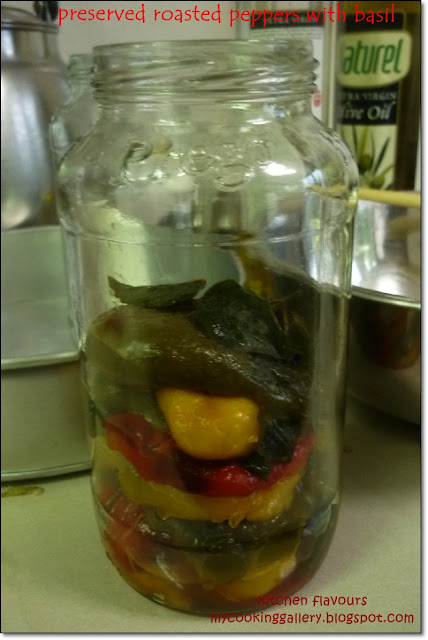 Place them in a sterilized glass jar, layering the peppers in between pieces of fresh basil leaves. I added in a pinch of salt. Pour some olive oil over until peppers are soaked in oil. 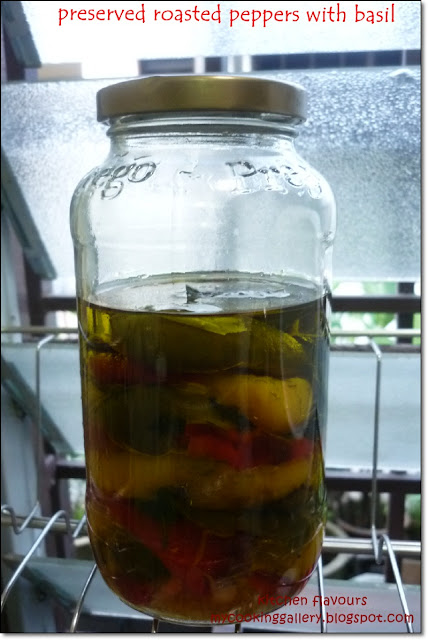 You may serve immediately or keep in the refrigerator. I prefer to keep it for a few days before consuming, so that the flavours of the basil leaves are released. Use this in salads, would be perfect for the coming festive season. 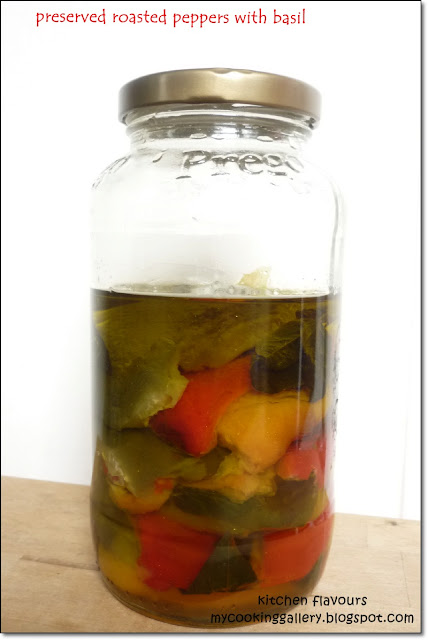 Will be using this soon, when I'm back!
I'm submitting this to the Christmas Giveaway in The Sweet Spot, any dish or bake, sweet or savory, with green and/or red in it. Please hop over to The Sweet Spot for more details.
Preserved Roasted Peppers with Basil
(adapted from "Rachel's Favourite Food At Home" by Rachel Allen)
4 peppers, of various colours, left whole
Olive oil
Basil leaves
Preheat the oven to 230C (450F), gas mark 8. Rub some olive oil over the peppers, then pop on a baking tray in the oven. Cook for about 40 minutes, or until very soft and a little blackened. Take them out of the oven, put into a bowl, cover with cling film and leave to cool.
Once the peppers are cool enough to handle, take them out of the bowl and use your fingers to peel off the skin and break the peppers into quarters. Do not rinse in water or you'll lose the flavour. Then, using a butter knife, scrape the seeds away, which should leave just the flesh. Layer in a sterilised jar, adding basil leaves between the peppers, and fill up with olive oil.
kitchen flavour's notes :
I added in a pinch of salt before I pour in the oil.
Posted by kitchen flavours at 4:45 PM