"Ladle It Up", the theme for this week at I Heart Cooking Clubs (IHCC).


For this week, I've selected Pumpkin and Tomato Laksa, recipe from The Kitchen Diaries. I have some leftover pumpkins which I needed to clear, and some tomatoes too in my fridge. In the recipe instructions, the pumpkin is peeled,  and cut into chunks, then steam for a few minutes until tender, where they will be added to the laksa gravy towards the end of cooking time.  I feel that this is an unnecessary step, as pumpkin gets cooked really fast. I omitted the steaming and simply added the pumpkin chunks along with the tomatoes into the laksa gravy, and cooked for about 8-10 minutes until they are soft and tender.

The laksa paste smells really nice. Made up of red chillies, garlic, ginger, lemon grass, lime leaves, coriander roots and leaves, which are all blended into a fine paste. I've added half a teaspoon of turmeric powder. Nigel has used only half the amount of the paste and he says to keep the other half for another day's use. I have adjusted the amount slightly to cook for only one meal. The paste is supposed to be cooked briefly in a saucepan, and he did not mention about using any oil at all. I have however, cooked the paste in some cooking oil, which I heated first, and fry the paste until they are fragrant, about 5-8 minutes. Then add in some stock and coconut milk (I've added the coconut milk at the last step of cooking). At this stage, I've added in the chopped tomatoes and pumpkins. Season to taste with some lemon juice, fish sauce and salt, let it simmer for 8-10 minutes until the pumpkin are soft and tender. I added in some fish balls during the last few minutes. And the coconut milk is added in, let the gravy come to a simmer, and ladle into bowls of pre-cooked noodles of your choice. I've used rice vermicelli. And garnish with some chopped coriander and mint leaves, and hard-boiled eggs, just because! 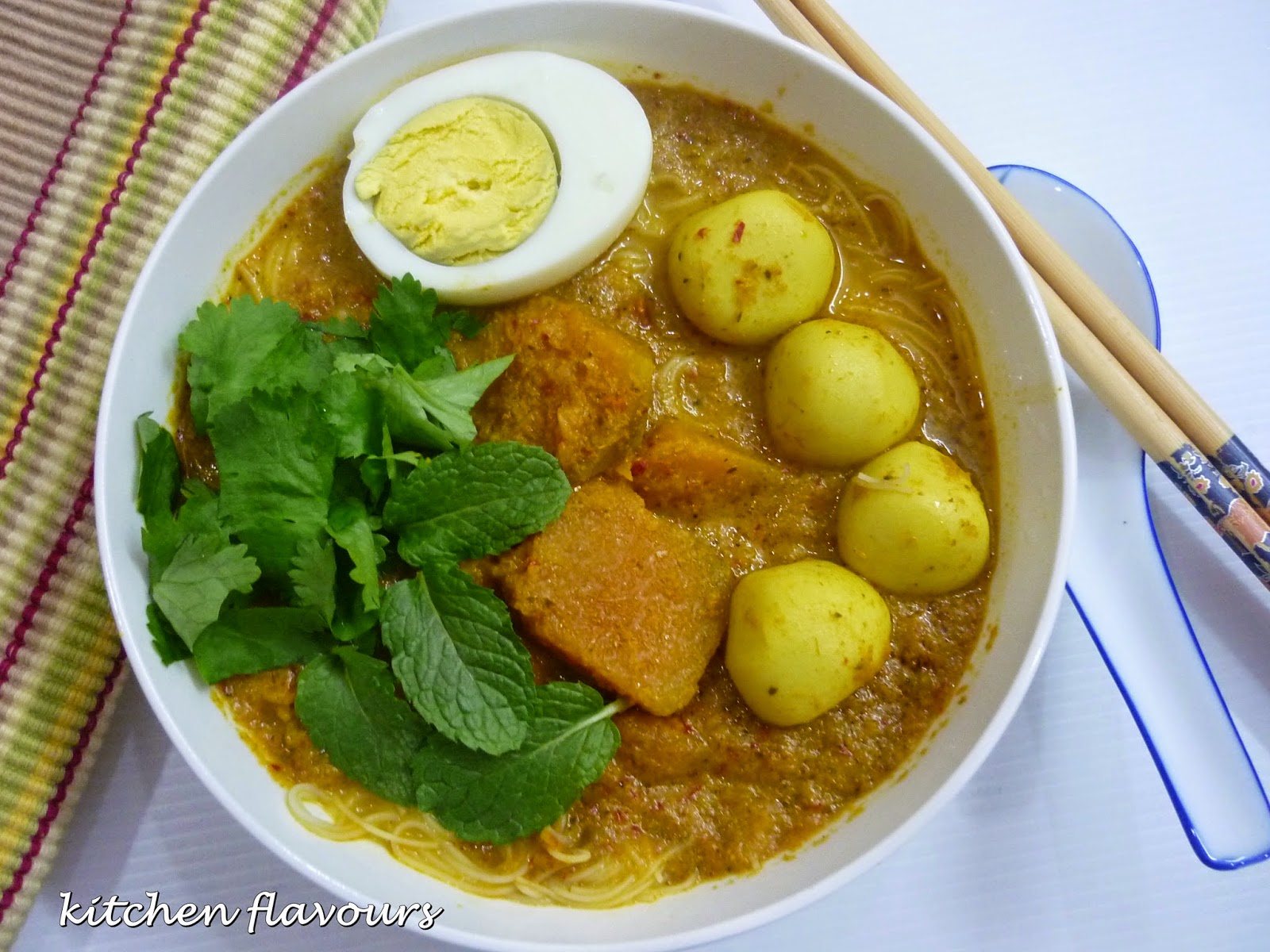 Simple and easy to cook. Though it does not exactly taste like our local laksa which is really rich and spicy, this bowl of mild laksa makes a nice meal. This is the first time I'm using pumpkin in a noodle laksa, and it makes such an interesting ingredient. The hard-boiled eggs and fish balls are my addition. Some cooked chicken meat may be added for a more substantial meal. 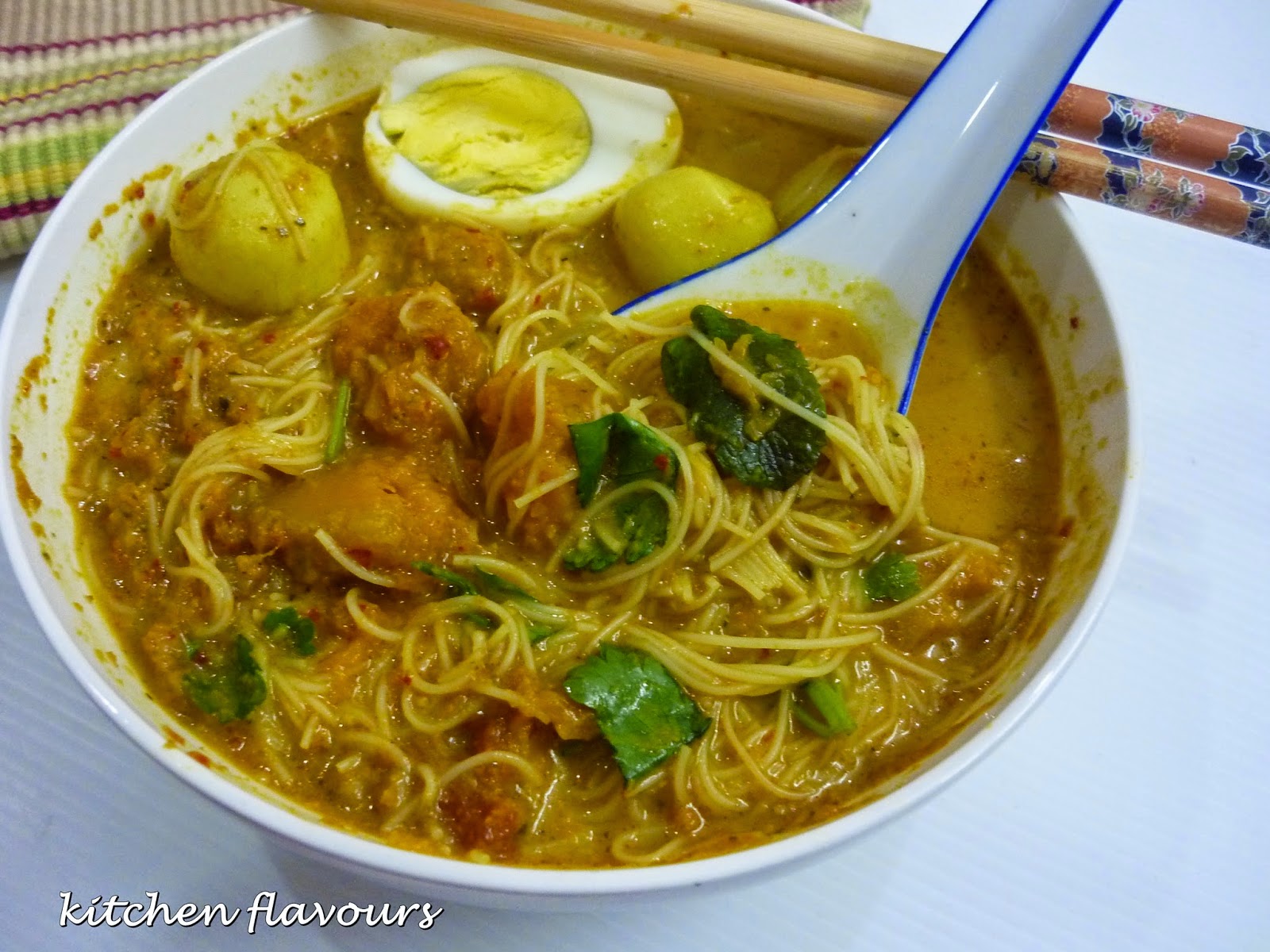 Pumpkin and Tomato Laksa
Did not realize how messy the bowl looks after I stirred the laksa until I see this photo much later!


Cut the pumpkin into large chunks and place in the top of a steamer (alternatively, steam them in a colander balanced over a pan of boiling water). The pumpkin should be tender in twelve to fifteen minutes. Remove from the heat. (I omitted this step, I simply add in the pumpkin chunks along with the tomatoes later)
Chop the chillies, removing the seeds first if you wish, peel the garlic and ginger and chop roughly. Put them all into a food processor. Discard the outer leaves of the lemon grass and roughly chop the inner leaves, shred the lime leaves, then add them to the chillies. Scrub the coriander roots and add them to the chillies, along with half the coriander leaves and stems. Blitz them to a pulp, adding a little vegetable oil if the mixture needs it to go round.
Place a fairly deep pan over a moderate heat, add half the spice paste (keep the other half in the fridge for tomorrow) and fry it, moving it round the pan so it does not scorch. Do this for a minute or two, then pour in the stock and coconut milk and bring to the boil. (I heated some oil, fry the spice paste for about 5 minutes until fragrant before adding in the stock)
Cut the tomatoes in half and add them to the soup (together with the chunks of pumpkin), with the nam pla and lemon juice. They will take seven to ten minutes to cook. Add the chunks of pumpkin and continue cooking for a minute or two. (Add the coconut milk, let it some to a simmer). Place a swirl of cooked noodles in each of four bowls, pour over the laksa and add the mint and the remaining coriander leaves.
Enough for 4.


I'm linking this post with I Heart Cooking Clubs (IHCC), theme for this week "Ladle It Up" 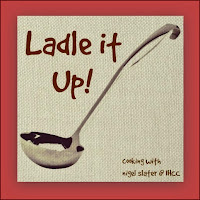 Posted by kitchen flavours at 12:27 PM