I have heard of Bill Granger and have seen his cookbooks, and that is as much that I know of, about this Australian food writer. I don't even remember ever watching any of his cooking shows on TV. From what I've read from various websites, he is a self-taught cook, a restaurateur and food writer. He is very popular in Australia and has a large following of fans. I could be one too, well, at least for this pasta dish that I'v tried. 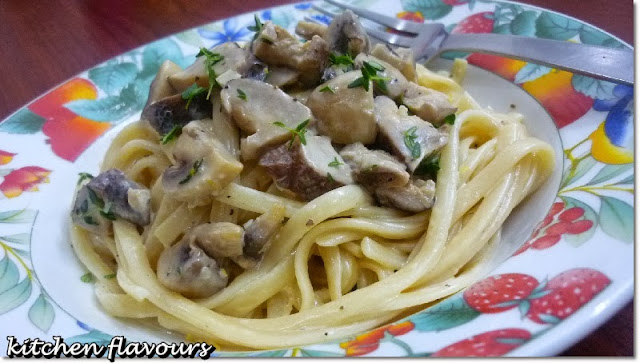 This pasta dish is very simple and quick to make. The recipe uses dried porcini mushrooms, since it is not available in the area where I live, I have substitute with dried shiitake mushrooms instead. I have no idea how dried porcini tastes like, never tried them before, but the dried shittake mushrooms works out great, for me.


I have used white button mushrooms and garnish with fresh thymes from my garden, since I do not have any parsley at hand. Recipe uses zest of one lemon and some lemon juice to taste, if you are making this pasta, do not skip the lemon, it really brings out the flavour of this pasta dish!


I have used linguine instead of pappardelle, as I always have a pack or two of linguine and spaghetti in my pantry. While the pasta is boiling, prepare the creamy mushroom sauce, which takes only minutes to cook. I have used a little more water from the soaked mushroom and more cooking cream than the recipe calls for, as my kids like to have their pasta a little "saucy"! Drain the cooked pasta and toss in the creamy mushroom sauce, serve immediately, garnish with either fresh chopped parsley or fresh thymes. 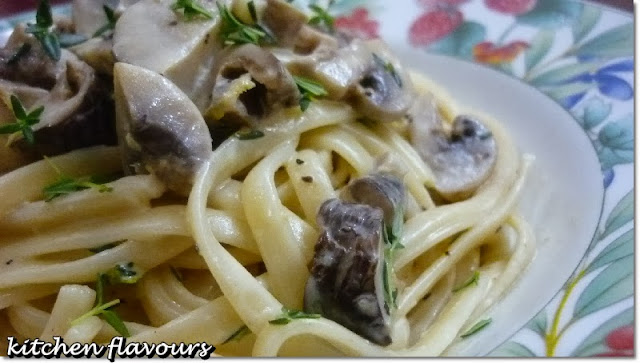 Review : A delicious pasta dish. Really well-liked by my kids and myself included. Simple and delicious, I would definitely make this again. Am I a fan of Bill Granger yet? I'm getting there! And I like his Chicken Drumstick with Paprika Garlic.


Soak the dried porcini in 75ml/3 fl oz boiling water for 15 minutes. Drain, reserving the soaking liquid and roughly chop the porcini.
Cook the pasta according to packet instructions. While the pasta cooks, heat the butter and oil in a large, non-stick frying pan, add the mixed mushrooms and fry over a high heat for 3 minutes. Tip in the soaked porcini, garlic and thyme and cook for a further 2 minutes.
Strain the porcini liquid into the pan with the lemon zest and juice. Season well, remove from the heat and stir in the cream and the drained pasta. Finish with the parsley and serve.

I'm linking this post to Cook Like A Star : Nov/Dec featuring Bill Granger, hosted by Zoe of Bake For Happy Kids, Yen of Eat Your Heart Out and Mich of Piece of Cake. 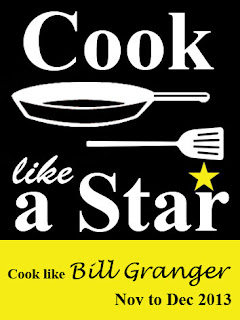